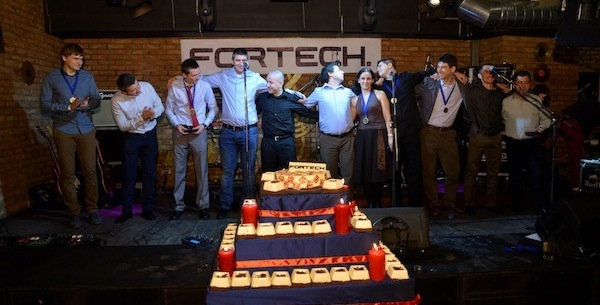 Currently a solid software development outsourcing company in Romania, Fortech was established in December 2003, starting with a team of five people. Following a steady growth model, the company constantly added new clients and new team members gradually, becoming one of the most important providers of IT outsourcing services in Cluj-Napoca and Romania.

The tenth anniversary was marked by a company event centered on the celebration of the people at Fortech.

Many colleagues attended the event and some of them took center stage and delivered memorable moments throughout the program. Colleagues with various talents and passionate about innovation, sports, or other similar activities were awarded for their involvement in Fortech team initiatives. And everyone enjoyed an evening filled with fun, emotions, and many surprises.

It was a night that recalled important moments throughout Fortech’s journey and set the foundations for a bright future to come. 2014 will continue with a series of initiatives meant to further celebrate a decade of impressive achievements in software development. Fortech is grateful to all its partners and colleagues for their contribution and engagement.

Photos from the event are available in this album and some video highlights on Vimeo.