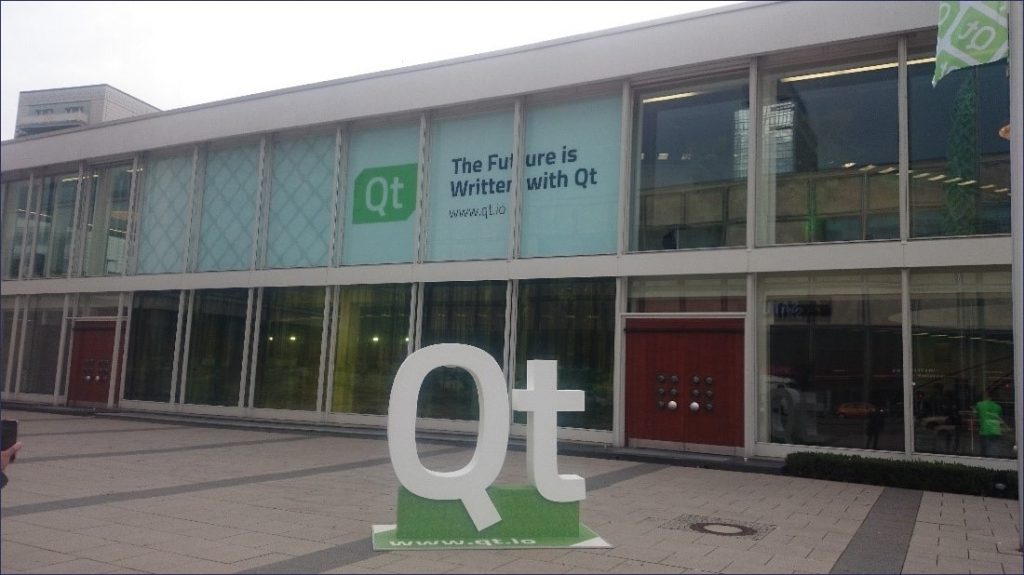 Between the 10th and 12th of October, the Qt World Summit was for the third time on our radar. I was glad to be once again among the delegation of Fortech representatives at the event, along with two of my colleagues – the head of IoT Department and one of the Qt lead developers in Fortech. This year, the event returned to its traditional location – the bcc (Berlin Congress Center) in Berlin, after being held in San Francisco last year.

Qt WS is the most important yearly event in the Qt community, where Qt development progress and new focus areas are presented. It is a good opportunity to meet fellow Qt enthusiasts and see what they are working on, or discuss directly with the people heavily involved in maintaining the Qt framework. Over the course of the event, there are plenty of technical presentation on various aspects of the Qt framework and keynotes from key Qt people, industry leaders, and technology trendsetters.

It was my second Qt WS, after the one in 2015. Both times I joined as a presenter. After talking about a Qt implementation of the CQRS pattern 2 years ago, this year was about sharing my team’s experience with implementing our first Qt mobile app: the good, the bad, and the ugly. It was nice to see a fellow Qt enthusiast continuing the CQRS idea and a lot of interest in the Qt mobile area.

In the following paragraphs, I’ll guide you through my experience there, the overall feeling of the event, main Qt focus areas and what I’ve found most interesting from the presentations I attended. You can watch all the sessions here.

The focus on the Qt framework is growing in the automotive sector since the Qt Company is determined to become one of the main technologies for this sector. At the Qt WS, they showcased proof of concepts focused on vehicle HMIs (different UX approaches, demos focusing on fast boot time or integration of physical knobs that can be attached to touch screens).

But the biggest attraction was the concept car showcased by Mercedes. It presented their view of the future: every surface in the cockpit can act as an HMI device. 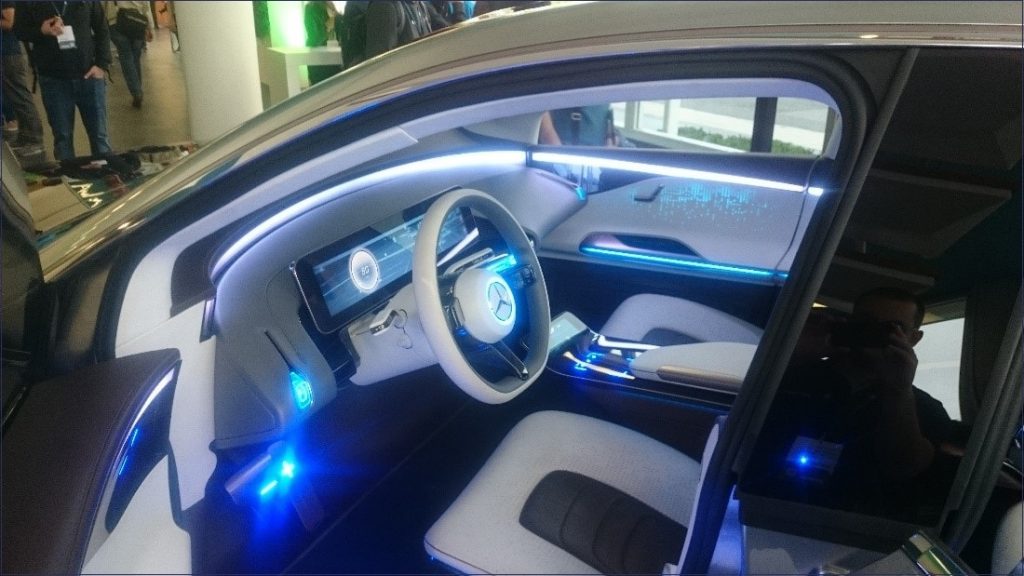 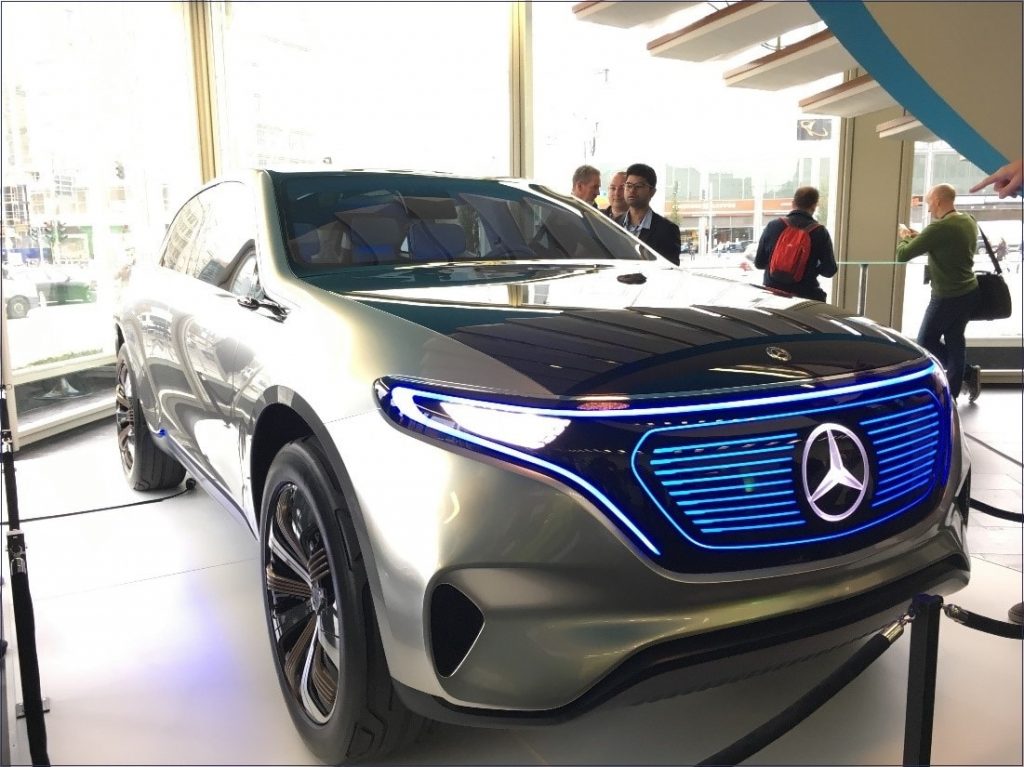 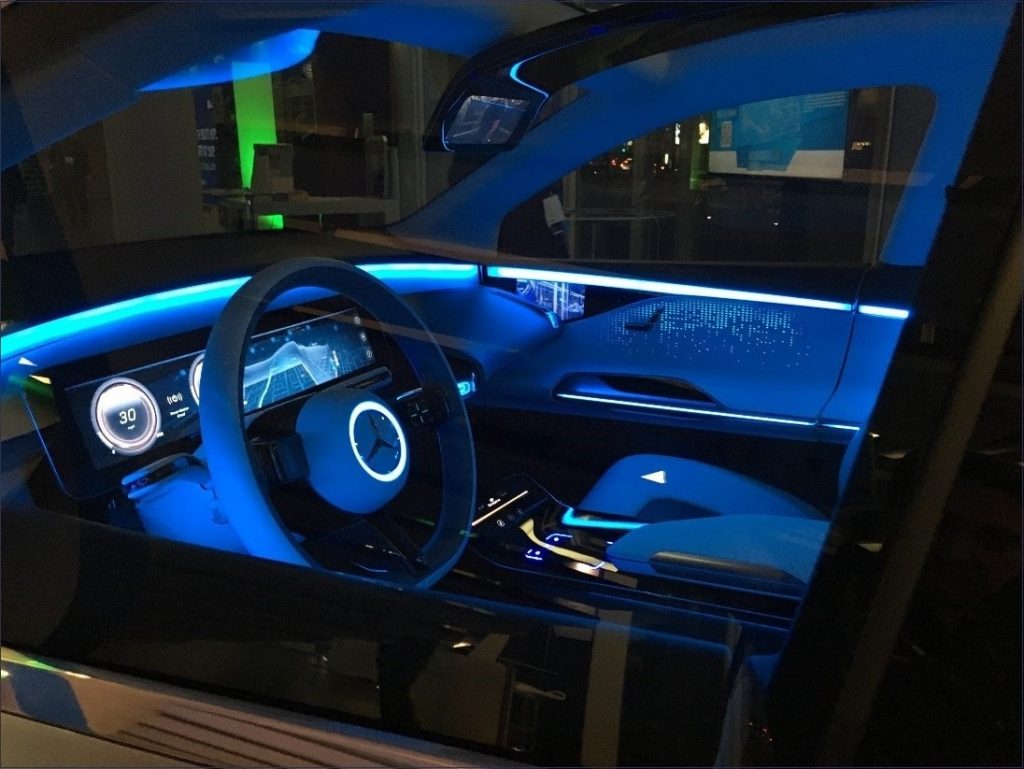 In the automotive industry, we noticed another topic tackled by the Qt framework – mapping solutions APIs. With a lot of effort spent on improving the Qt Location API and multiple map providers joining to provide plugins that can be used with Qt, this direction shows a lot of potential for future developments.

Another area where Qt is growing both in features available and community interest is Qt for mobile. The overall interest has grown a lot from two years ago (or I noticed it a lot more than before as now is a topic of interest for myself).

During the three days of the summit, there were 6 presentations on various topics of mobile development, all covering different perspectives and features of what Qt for mobile has to offer and where improvements are needed.

Qt and the IoT field

The third point of focus was the IoT field. Qt is investing massively in supporting various communication channels, such as Bluetooth classic, Bluetooth low energy, CAN bus or serial bus.

A significant effort is also allocated in making Qt as small and efficient as possible. This means a high freedom for configuration and the ability to integrate various standards in the Qt framework. We also saw promising proof of concept presentations for a KNX wrapper and a WebGL solution.

The official direction of Qt development was presented in a keynote by Lars Knoll, Qt Company CTO. He restated the main principles followed by Qt:

He also presented the company’s strategy to maintain such principles in every aspect of the framework.

During his presentation, Lars Knoll complemented the strategy overview with a few of the directions the Qt Company is investing in to achieve their goals. One big improvement over the last year was the graphics engine. They removed OpenGL hard dependencies, increased Vulkan support, highly increased the performance of Qt3D, released their first renderer ISO 26262 ASIL B compliant and released their first 3d dedicated tool, Qt 3D Studio, in collaboration with nVidia.

The most expected keynote, at least for me, was Herb Sutter’s talk about Modern C++. It was a technical presentation, during which he talked about one of his personal research projects: adding metaclasses in the C++ language. As a software architect, it is one of the things I’m looking forward to making it in C++ standard, as it will provide a compile time tool to ensure the design is not breached.

Another keynote which caught my attention was from Takayuki Tanabe, CEO of Panasonic ITS – Future of Vehicle HMI Systems. It was an interesting insight into what Panasonic is doing at this moment to increase driver, passenger and fellow traffic participants comfort and safety by synchronizing all the HMI devices into an e-Cockpit. This was followed by a presentation on what Panasonic desires to do for the future of the autonomous cars field, and how they expect to achieve it.

Probably the best non-technical talk was Igor Beuker’s keynote about Trends in Software and Business. He presented his ideas about the impact the 4th industrial revolution will have on the current business models and what could be the future of software.

After 2 days of interesting talks, networking, and talking about possible collaborations, I left the event with the impression that Qt is a big family of geeks. Many of the people I’ve met two years ago joined again, and it was nice to discuss what has changed in Qt and how we used it in our projects since then.

Everybody there was eager to learn more, see how other developers solved the problems they are facing now, and have a glimpse into what the future of Qt might be. Most of the talks were technical, some of them deep technical dives into the Qt’s core functionality.

It was a great experience overall, but it also had a downside: more than once, very interesting topics shared the same time slots. I hope though that in the future I’ll be able to clone myself to be able to attend all the topics I want.

Oh, and one last thing… the desserts were awesome! See you around at Qt WS 2018.

C++ developer and Engineering Manager at Fortech, with interest for engineering topics, CAD applications and teaching others.