There are a few people born to lead and achieve great things and Oana Șipoș is, without a doubt, one of them. From working from home before it was cool, to finding a dream team at Fortech and crafting her way to becoming a leader and a true pillar in the Fortech community. Learn more about Oana’s inspiring journey of building communities and finding her place as a professional.

Tell us a bit about yourself – why did you choose the IT industry? How did you join Fortech? 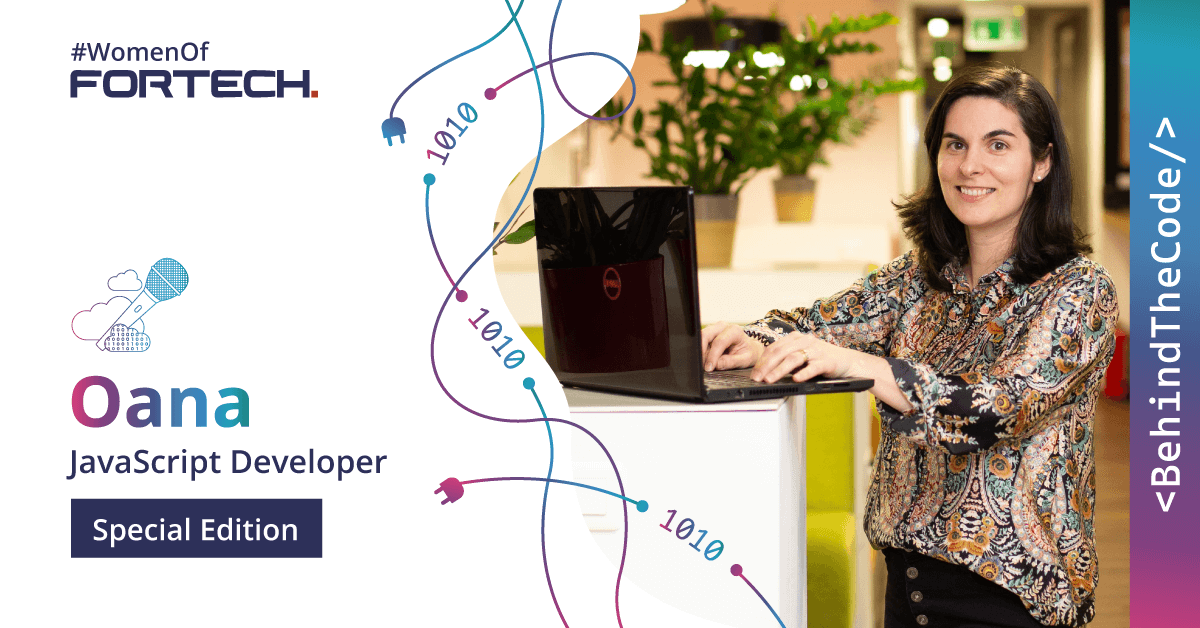 I am not sure if I chose the IT industry, or IT chose me. The whole thing was very random. In 2007, when I finished high school, I was incredibly confused about what I wanted to do next. One day, while I was at the county library, I started telling the librarian how difficult it was to decide my future. The librarian listened to the whole thing and advised me to go to Cluj because “a Nokia store has opened there”. Even if that didn’t mean much to me, I followed the advice. Shortly, I applied to the University of Economic Studies and the Technical University of Cluj-Napoca (UTCN). That’s how I was admitted to the Faculty of Electronics, Telecommunications, and Information Technology at UTCN. Four years later, the software industry stole me altogether.

In my college years, I met a super geeky friend, Stas, who was working with Ruby. I was writing my thesis during that time, and he convinced me to choose Ruby as my thesis’ subject. Speaking of what impact the people in your circle have on you! I didn’t even know about Ruby that well. If I started now from scratch, I would most likely have to do research on a diversity of technologies and their particularities.

A few years later, I joined Fortech with the help of Alex Moldovan, the former team leader. We first had contact on Twitter and got to know each other from there. I lived in Belgium for 3 years, and in 2016 I returned to Cluj and worked from home. When I returned, Alex told me about a job opening in his team and that we should meet up to talk about an exciting project. As I worked from home and, contrary to the current trend, this was not very popular, I was curious about the offer. Alex did a great job at selling me the role. He showed me how the team works, the best practices they apply in software development, and the team’s desire to grow, which was in line with what I wanted. And that’s how I joined Fortech.

How did your career evolve at Fortech?

“There are people in your life who have more experience than you or are a few steps ahead and their impact on your professional and personal growth is invaluable.”

I started with Ruby and Ruby on Rails. I was the only one in the team working with that stack. There were times when I felt like an “intruder” in the team, as I was the only contact for the client and everyone else was working with JavaScript. That was the time when Alex jumped in and said, “You can leave Ruby aside if you want and switch to JavaScript if you’d prefer to be in line with the team.” It was clearly a leap I wanted to take.

I strongly believe in the power of mentoring, and Alex was one of those mentors to me. There are people in your life who have more experience than you or are a few steps ahead and their impact on your professional and personal growth is invaluable.

What software project were you working on before maternity leave and what were your responsibilities?

As I previously said, I started with Ruby and then I worked with JavaScript for two other projects. The last project I worked on was from the Hospitality Industry. It was a Guest Communication App that comes to the aid of hotels and guests as a tool to facilitate bookings of activities, tables, room service, check-in, opening room doors, and more. The back-end was wrote in Ruby and Rails and the front-end in React.

At one point in my career, I realized that the team is having difficulties aligning their efforts, and I saw an opportunity to help. I remember going to the client and proposing to be the person in charge of managing the team for half of the working time, and in the other half of the time to continue my development tasks. My proposal was accepted, it was fantastic! At that time, I realized that I didn’t want to spend 8 hours full on software development or project management. For me, being able to do them both was the ideal combination.

Tell me something you like most about your team.

“I really enjoyed our team because we have a growth mindset.”

For me, it’s important to like the project you are working on, but it is also crucial whom you’re working with.

I really enjoyed our team because we have a growth mindset. The feedback I received throughout time was helpful and constructive. Moreover, the team created a healthy environment to grow and explore what you want, while also being responsible for what you deliver. 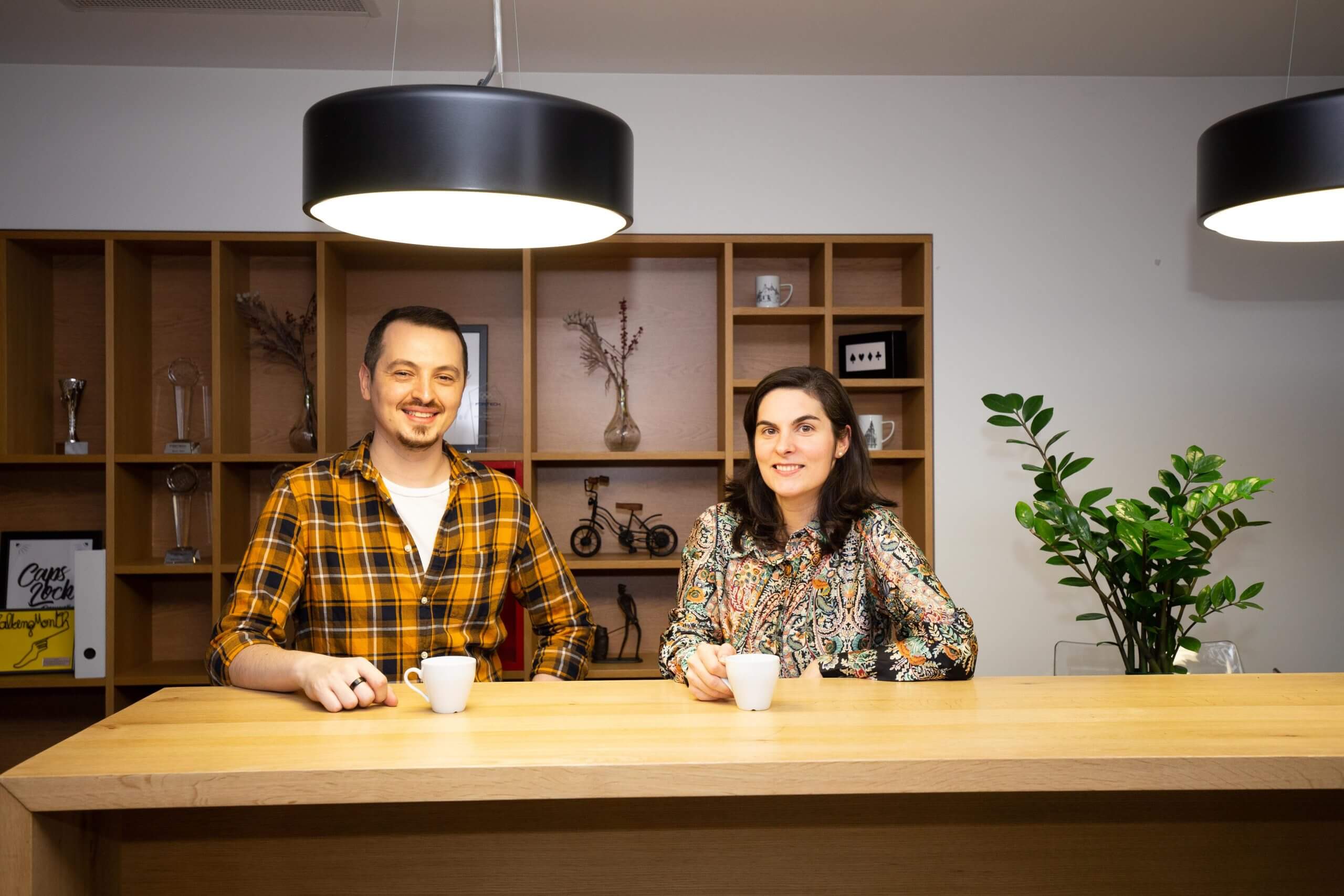 Oana and Alex during recording of the podcast.

I know you are an active community member. Can you share with us some details about your involvement?

It’s important to me to be involved within the community and a lot of my spare time goes there. My soul project is JSHeroes, the JavaScript conference organized in Cluj-Napoca, one of the world’s best conferences. The feedback received over the years from the speakers and participants was extremely positive. Unfortunately, JSHeroes was put on hold due to the pandemic, but we will return this year.

I’ve also been involved for the past four years in “Women in Tech Cluj”, a community in which we support women in technology by sharing ideas and experiences. We try to offer a safe environment in which any woman can express herself and grow.

In what other activities were you involved in Fortech?

I was the host for the “Fortech on Air” internal podcast. In addition to that, I also took part in the NodeSchool event, where my team and I were in charge of organizing and mentoring participants.

What do you do in your spare time?

I spend most of my spare time with my two kids. I also love reading and being a part of a group and, whatever I do, I always return to communities. Even if it’s difficult for me to do this, if I look back, I invest a lot of time in communities.

What would you like to receive for International Women’s Day?

The magical power of sleeping 8 hours per night :D That, and the gift from Fortech. I’m eager to find out what the girls prepared for us this year; I heard it’s on its way.

Browse the Fortech Careers section on our website and check out our opportunities. #CodeWithUS

We’re looking for Full-Stack Developers with experience in Java + Web, or .NET + Web, to help us craft Fortech’s story. Join us.

We’re looking for Front-End Developers eager to leave a mark on Fortech’s story. Join us in our journey of crafting software development projects for a large variety of industries.

Share your passion for technology in an environment that fosters teamwork, empowerment, and trust. Join a community united by common values and explore new perspectives in your professional development.