Python Libraries for Machine Learning and AI: Getting the Most Out of Python Development Services

Machine learning (ML) and artificial intelligence (AI) are two emerging technology areas expected to achieve massive growth in the coming years. According to Markets and Markets, the global machine learning market will grow to USD 8.81 billion in 2022, and the global artificial intelligence market is expected to break the USD 500 billion mark in 2023, reports International Data Corporation (IDC).

The COVID-19 pandemic accelerated the adoption of these emerging technologies, and businesses are eager to gain a competitive edge and enhance the customer experience. With the various machine learning applications across several industries, from retail to healthcare, getting the most out of machine learning is paramount.

Python is the go-to language for data science. The majority of developers involved in data analysis (54%), data engineering (54%), and machine learning (71%) use Python – JetBrains Survey

Some businesses are already seeing benefits from integrating AI into their processes more accelerated than previously planned. Frito-Lay, an American subsidiary of PepsiCo that manufactures, markets, and sells snack foods, ramped up its digital and data-driven initiatives, compressing five years’ worth of digital plans into six months.

The need to analyze data grew in organizations across all industries in the last couple of years, and the python software development environment supports the analysis of large and complex sets of data through machine learning. Thus, coupled with a “batteries-included” philosophy and great math library support, Python grew in popularity.

This article will explore what makes Python the best programming language for machine learning and AI.

Python stands out in the digital world as developers have relied on its versatility and efficiency for over 30 years.

The programming language is a powerful tool for data science (artificial intelligence and machine learning solutions) as it performs great with tasks like data manipulation and automation of repetitive tasks. This encourages businesses, from startups to multi-billion-dollar companies, to create complex and innovative applications with Python development services.

Why Do We Prefer Python to Implement Machine Learning Algorithms?

From development to deployment and maintenance, Python helps developers by being concise and readable, which is beneficial to machine learning projects. It is also fast compared to many programming languages, and it allows developers to test algorithms without implementing them.

“There are a whole bunch of common programming tasks that are easy in Python” – Guido van Rossum, the creator of the Python programming language.

What makes Python One of the Most Successful AI Programming Languages?

Python has a well-structured code, a clean syntax and for developers is easy and fast to incorporate libraries, and this makes it perfect for AI programming. Due to its popularity, compared to other programming languages, many algorithms are already written and available to everybody, so for junior Python developers is an easy start even if they’ve never written any code for AI. More so, Python offers a rich ecosystem that helps developers at every step. For example, with the Matplotlib library, they can build static, animated, and interactive visualizations.

Why is Python so Popular with Developers?

In 2021, Python was the third most popular language among developers, according to the 2021 Stack Overflow Developer Survey. Also, 67% of responders mentioned that they love working with the language.

But what makes Python so popular? Here are just a few reasons we’ve gathered from our Python software engineers:

Getting started with Python is easier for developers than with compiled languages like Java due to its human-friendly syntax and loose typing. This easy readability and quick feedback when coding means that developers can quickly get up to speed on the language.

Python has an expansive and vibrant community of developers who have been working with the language for quite some time. There’s an abundance of documentation and support for developers of all skill levels to lean on.

Python can be used on Windows, Mac, and Linux platforms and is the standard language for scripting DevOps tooling on native cloud platforms. Developers aren’t restricted in the types of applications they use Python to build, giving them the freedom to build applications for the web, mobile devices, and more.

Python has an extensive list of open source and proprietary libraries. With libraries, developers don’t have to code everything independently, simplifying things and speeding up development velocity.

Some of these frameworks offer good visualization tools. Considering that in machine learning and AI, it is essential to present data in a human-readable format, Python is a perfect choice for implementing this feature.

Plus, with the expansive community and major companies like Google and Facebook backing Python, support for library development isn’t expected to slow down.

Extensive Selection of Libraries and Frameworks

Let us briefly look at some exciting Python libraries for ML and AI development:

Pandas makes it simple to do many of the time-consuming, repetitive tasks associated with working with data: statistical analysis, data visualization, data fill & more. 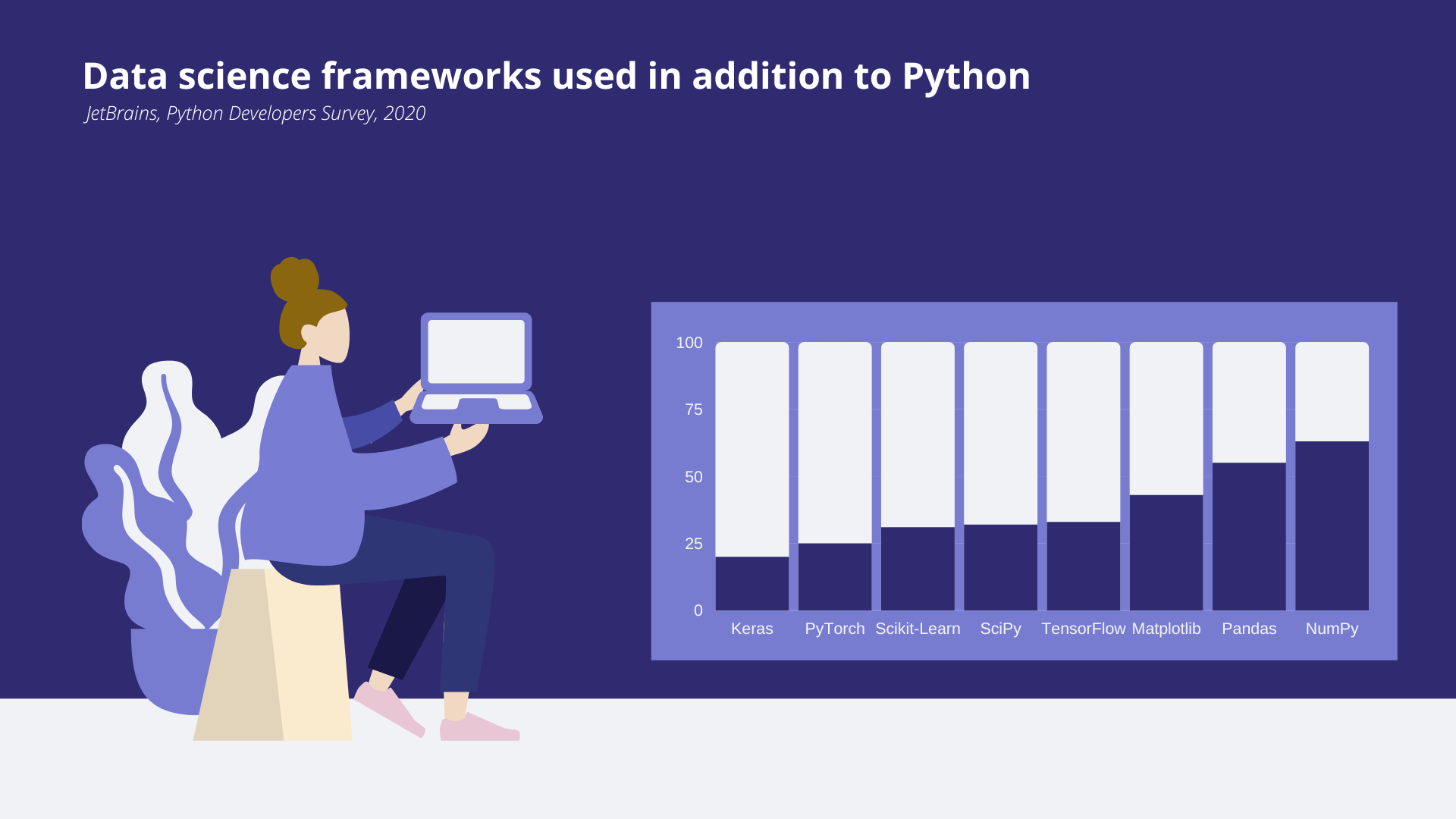 Python libraries provide a great starting point for businesses to get the most out of AI and ML technologies. At Fortech, we provide Python development services that help organizations build complex and feature-rich applications.

Python is ideal for both start-ups and enterprises, and through our agile methodology and development processes, we can provide support for:

Our Python developers can work with many of the libraries mentioned above, including TensorFlow and PyTorch, to provide exactly what your business needs.