Meet Ioana: a Dedicated Program Manager Who Recently Returned from Her Sabbatical

Few people are brave enough to take a leap into discovering themselves and Ioana Someșan is, without a doubt, one of them. From defining a new role in the organization to working with people and exploring the world for 6 months, take a glimpse into Ioana’s refreshing story of investing in people and herself.

Get a glimpse #BehindTheCode, meet Ioana, Program Manager at Fortech.

Tell us a bit about your professional background. 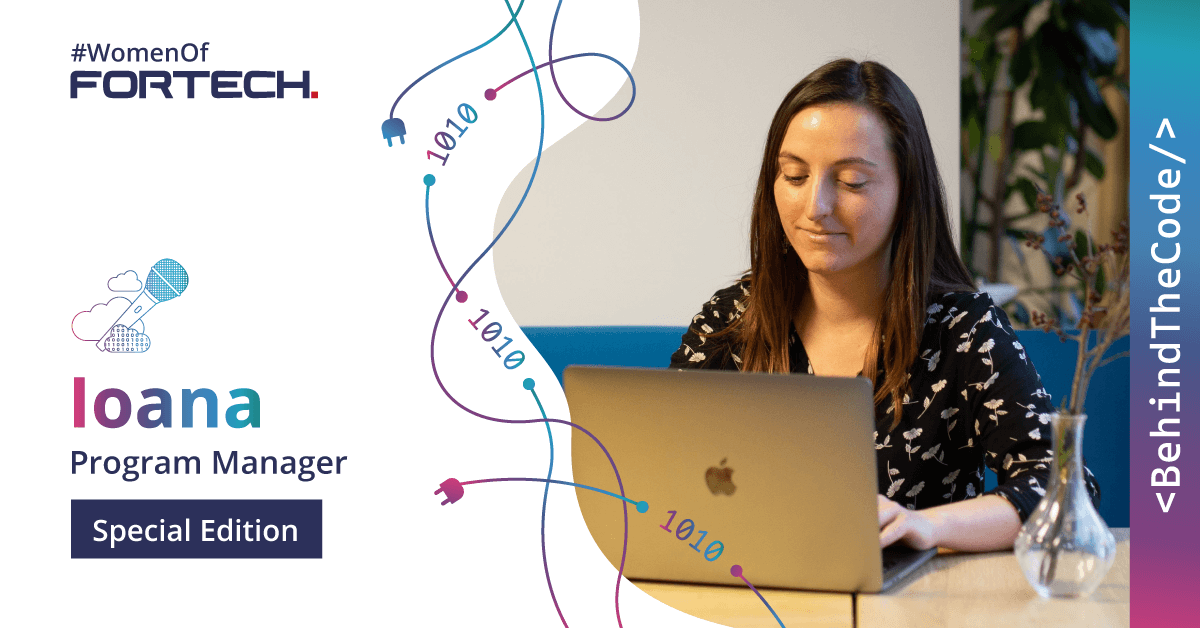 I started out as a Developer from the very beginning. At first, I worked in the back-end area, on .NET, for a Finance project. After that, I had a very interesting experience when I worked on a humanoid robot head. It was very interesting, but I decided to change direction because it seemed very niched and the chances of continuing for a very long time were quite low. Then, I switched back to the web, doing mostly back-end development with .NET. The front-end was not as evolved at that time, so I didn’t do any advanced front-end work. It was still back in the days of Razor and early versions of Angular. I switched on to Project Management before transitioning to a senior role. Overall, I have worked on projects for the Healthcare, Finance and, now, Automotive sectors.

As a person with a technical background, how did you transition to a people-oriented role?

“Working with people is what charges me with energy.”

I think the biggest challenge for developers transitioning into Project Management is probably to feel a sense of accomplishment at the end of the day, even if they don’t spend much time coding. My first impressions in this position sounded like “Today I was in meetings all day, I didn’t do any real work.” This is an adjustment that takes a while to process. It is important to understand that working with people is just as valuable as coding. For me, this transition was natural, because I wanted this path, I find it enjoyable and working with people is what charges me with energy.

How did you join Fortech?

A former colleague I worked with was in a Management role and he told me about a vacancy in a team called Cake for Breakfast. The name already sounded intriguing and the interview went very well. I got along very well with Dragoș, the Unit Manager, and with Ancuța, who coordinates the whole Cake for Breakfast community. I truly liked their vision and what they wanted to build and I decided to join them on their journey.

How did your career evolve at Fortech?

How was your transition from Project Manager to Program Manager within Fortech?

I could say we’re still transitioning, as the role of Program Manager is relatively new in both Fortech and our partner’s organization. Currently, we are working on defining the responsibilities and the extent of the collaboration with the Growth Manager. In short, it seems to me that it came as a natural and smooth transition based on the interactions I had with colleagues and stakeholders.

What responsibilities do you have as a Program Manager?

Some of the responsibilities I have are linked to the operational area. I need to make sure everything goes well and that we have the right people in the right teams. What I haven’t told you so far is that we currently have a total of 16 teams in our account, operating in the British and in the European market. The technologies are quite diverse and it is a challenge to keep track of everything that happens and to make sure that people have the necessary flexibility from project to project. On top of that, we offer consultancy on new initiatives and challenges within the teams. From a technological point of view, we are partners with our colleagues in the UK, who work in the product area. We also try to balance out operational activites with more long term, strategical ones. This is an area I work very closely on with my Growth Manager colleague. 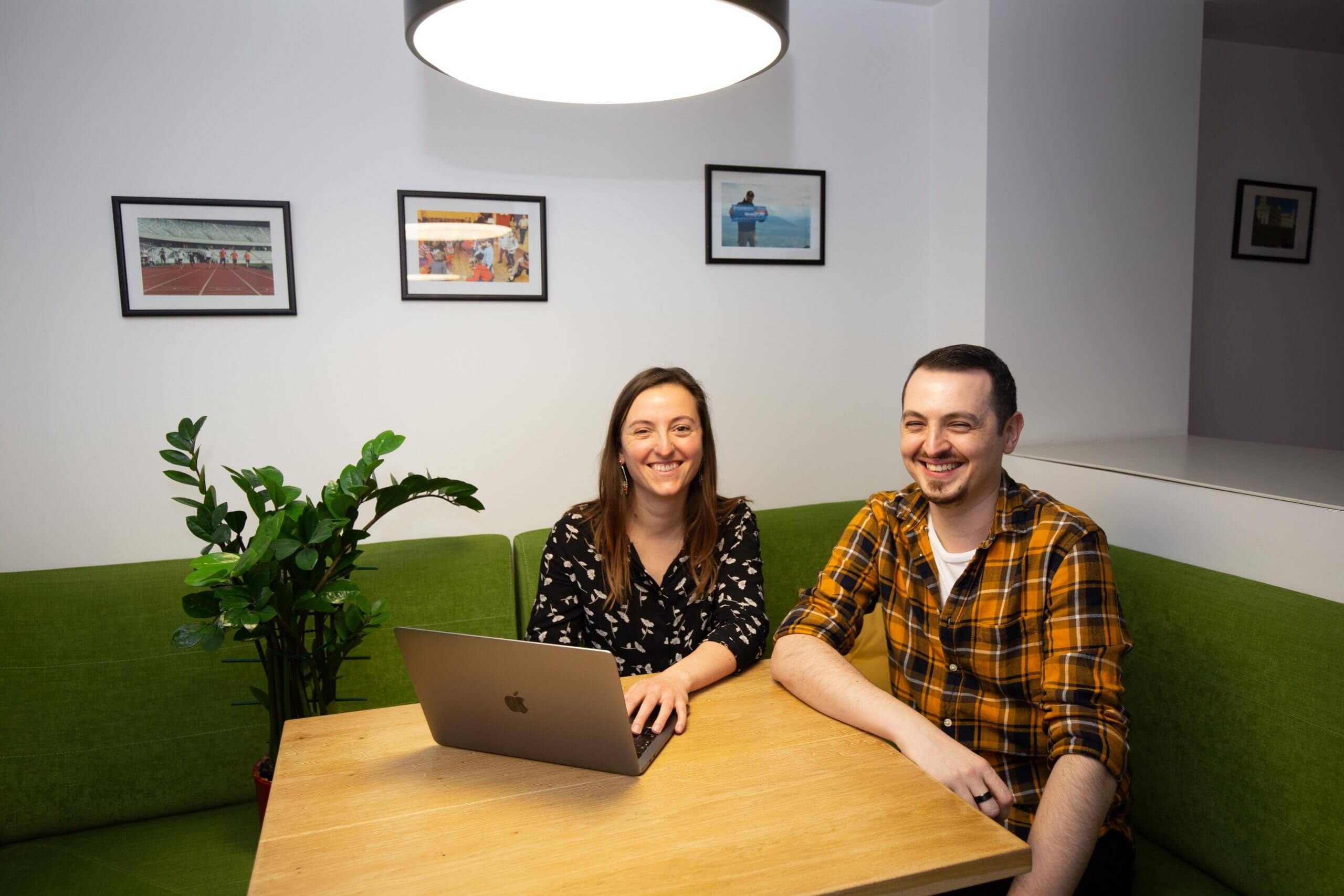 Ioana and Alex during recording of the podcast.

What software project were you working on and what technologies are you using?

Like I said earlier, my current project is for a client in the Automotive Industry. They handle the entire lifecycle of a car, from the moment when it leaves the factory, to the scrap metal cemetery. Everything that happens is managed by them, in several projects. As for our role, we use a wide range of technologies. .NET and React are some of the main ones, but they also include, PHP, Java, mobile technologies, on both main platforms and Salesforce. Soon we’ll also start a project on optimizing databases and improving performance in that area.

What do you like the most about this project? Tell us something that makes you proud of what you do.

It makes my day better to know that the people I work with are happy with what they do and that’s my favorite part of the role. As I have incredible visibility on everything that is happening, I can create opportunities for my colleagues. Doing a good job means placing people in the right places.

All the colleagues we have in the technical area are very proud of what they do. To support their efforts, we have a dedicated time for learning and growth. Those who have innovative ideas or who want to experiment with a technology can do so during the work hours, which I think is a great benefit for their overall professional growth.

Tell us an interesting team story.

Probably the most memorable moment I had within the team was the very first day I joined. Someone introduced me to the team and what was going on. This was when I learned that the team’s name: Cake for Breakfast, comes from the habit of eating cake in the morning. At the time, I thought it was just a marketing exaggeration, like all catchy names, but the next day, someone showed up with a cake at 10 o’clock and for me it was so wow! We really are Cake for Breakfast!

In what kind of activities are you involved at Fortech?

There are many communities at Fortech. I “tasted” each of them and I think my favorite activity is a children’s programming club, for which I volunteered with my colleagues last year and two years ago. Even if this activity took place in our spare time, it gave us a good opportunity to improve our collaboration during the program.

The organization I volunteered for is called “Cartea Daliei” (Dalia’s Book). The volunteers aim to provide equal education to all children, regardless of their background and create programming clubs where we work with a simplified and visual language that looks like puzzle blocks. Each groups has around 5-6 children.

I heard you took a long break from work to disconnect. How did you spend this time?

Last year, I was on that big vacation that all adults want, where I spent three months traveling. I rode my motorcycle to Iceland and back with my boyfriend. After that, I took another three months to think about life and its purpose. During my sabbatical, I experienced hobbies that I always had on my list, but never had the time to prioritize before. For example, I worked for a week in a cosmetics lab, I attended a jewelry apprenticeship and I learned to play the piano.

How was the return to Fortech and what was the reaction of the team when you returned?

It was definitely a transition, because when you go from a 24-hour program where you do only what you want to a normal program where you have things you must do, whether you like it or not, you have to reprioritize your energy. I think that’s the most important thing, but I try to take into account the things I was aware of during the break and not get to the same place I was before I left.

I think there were a few lost bets within the team because many thought I would return sooner, but still, no one was upset with me for returning when I did.

What do you do during your free time now?

“It’s important for me to experiment and learn new things constantly.”

It’s important for me to experiment and learn new things constantly, so probably the part that always stays the same is the variety of activities. At the time, I spend a lot of my free time practicing jewelry making, as I am close to finishing the apprenticeship I was telling you about. I also invest time into practicing the piano and, of course, focus on travelling, as this is my favorite activity.

What would you like to receive for International Women’s Day?

An undo button in real life … and a bouquet of flowers.

Browse the Fortech Careers section on our website and check out our opportunities. #CodeWithUS

We’re looking for Project Managers eager to leave a mark on Fortech’s story. Join us in our journey of crafting software development projects for a large variety of industries.

Share your passion for technology in an environment that fosters teamwork, empowerment, and trust. Join a community united by common values and explore new perspectives in your professional development.

Passionate .NET Developers wanted. Let’s write the future together, one line at a time! Our project portfolio includes a large variety of industries that can help you craft & grow.