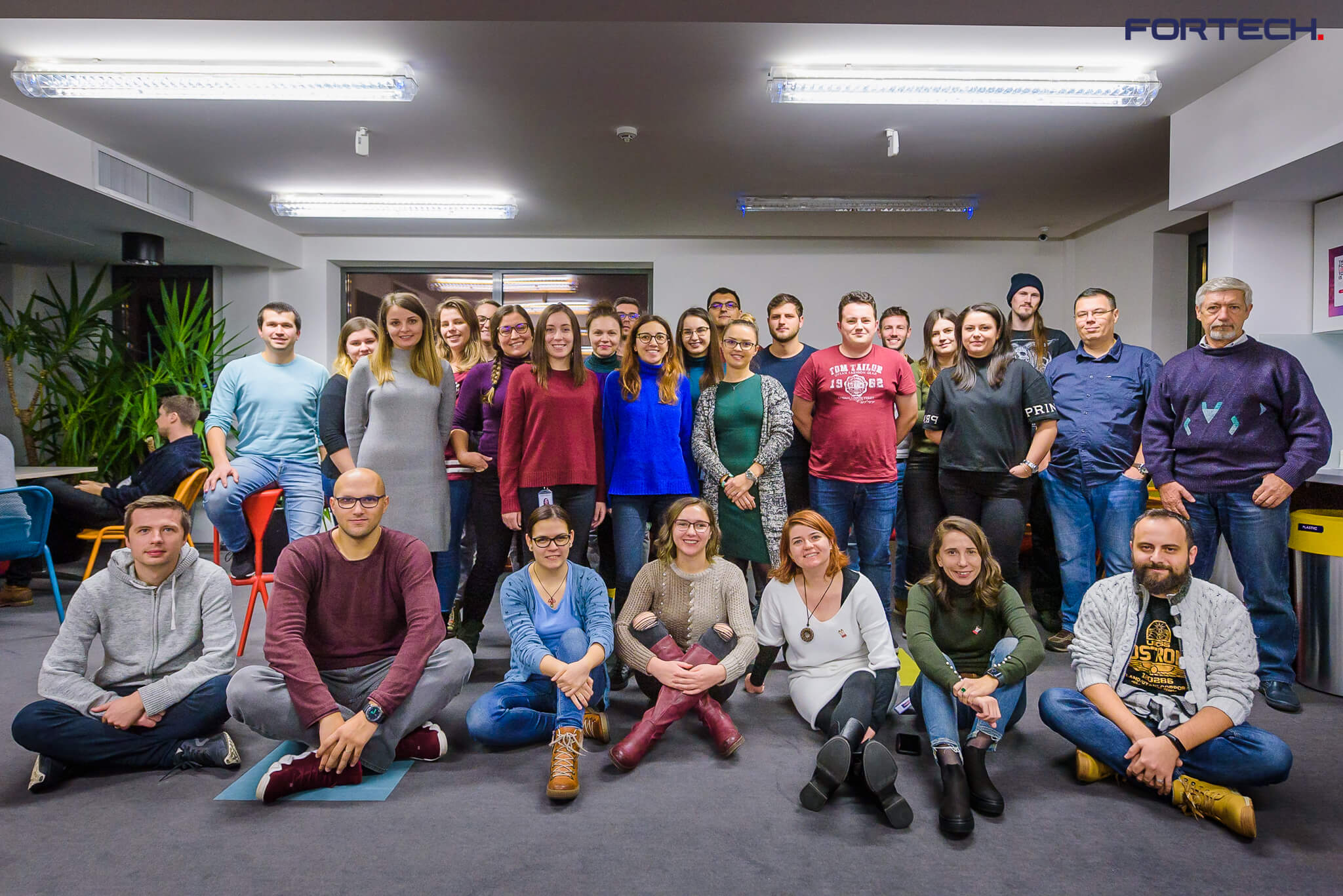 Part of Fortech Teams Involved in the Internal Fundraising Campaign

As good code is the beating heart of every successful product, a defibrillator has the power to restart the human heart. With such a perspective in mind, Fortech is actively contributing to the future of the healthcare ecosystem, not only by delivering custom software services for over 15 years but by developing a segment-oriented CSR approach. This serves as a platform for learning the needs doctors face and a trigger to imagine the possibilities that lie at the intersection of technology and healthcare. The company places an intensive focus on the healthcare vertical, bringing its expertise and 700+ technology passionate minds to solve real-life problems.

As part of its CSR strategy, Fortech will acquire and install seven defibrillators in public places from its hometown, to reduce fatalities induced by sudden cardiac arrest. According to the European Resuscitation Council, defibrillation within three to five minutes from the moment of collapse can produce survival rates as high as 50–70%.

The campaign is a premiere for Romania, Fortech being the first IT company to support the acquisition and installment of AEDs across the town. It is all possible thanks to a three-year collaboration with SMURD Cluj, one during which over 200 employees have learned how to perform CPR, an emergency technique used on someone whose heart or breathing has stopped.

To raise the necessary funds for the defibrillators, the company and it’s over 700 employees and collaborators united their efforts under the slogan “Nothing Breaks Like a Heart. Restart One”. Organized as a 20/80 game, the internal fundraising campaign stated that for each team that comes up with 20% of the total cost of a defibrillator, the company would pledge the rest of 80%.

“The local community is the ecosystem that supports us from the beginning and allows us to grow and further develop our expertise year after year. We are glad to be able to return the favor and say thank you not just with words, but with actions that help the entire community. For us, this is more than a donation, it is a way to involve as many people as we can in a campaign with a common goal, and our colleagues exceeded our expectations in every way. I want to thank them for all their work on this campaign and for proving that we are a team not just when it comes to developing custom software, but for a good cause, as well. I also extend my thanks to the SMURD team for their invaluable long-term partnership.” –  Calin Vaduva, CEO Fortech. 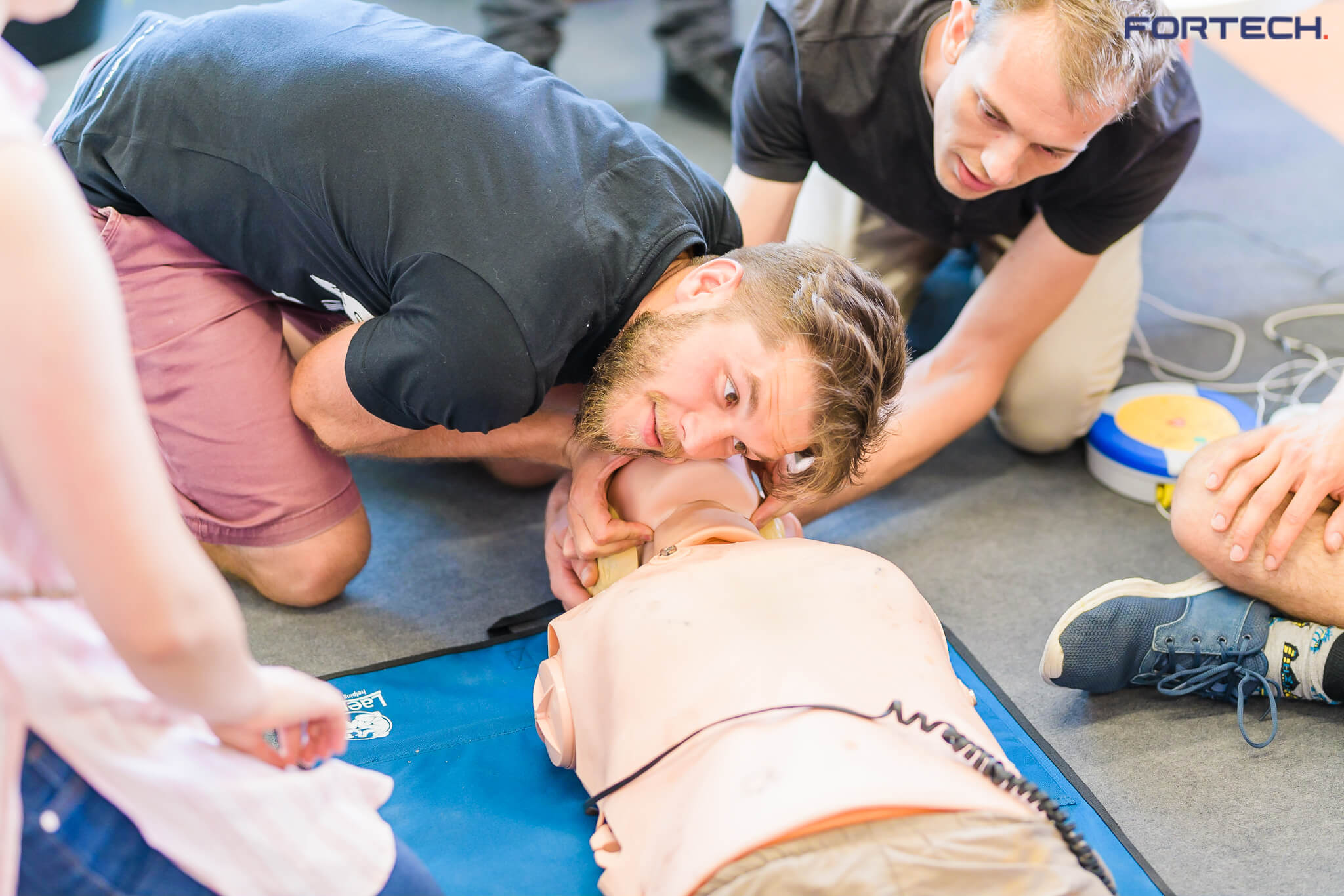 Our Colleagues During a First Aid Training

The SMURD first responders are a true inspiration when it comes to staying healthy and preparing for emergencies, through their CPR training courses they’ve inspired us to look even further and identify a specific need in the community: AEDs in public places. This campaign is only the newest action from a series dedicated to the health sector.

In 2018, Fortech supported the Beard Brothers association in their initiative for buying an ambulance for the local emergency service. Since 2017, Fortech also helps medical students from Romania and the Republic of Moldova to learn from the best doctors and paramedics how to save lives using real models and cutting-edge equipment during the Emergency Medicine Summer School. Together, they show a glimpse of Fortech’s coherent CSR strategy oriented towards healthcare.

The company supported a suite of educational, cultural or sports programs throughout the year. Fortech contributed to the opening of UBB’s first IoT Lab in Cluj-Napoca and has equipped an IT university lab in Oradea.

Back in 2015, Fortech initiated the Discover your Call in IT program. Next year, the program was managed by an independent organization evolving in what is today DPIT Academy, a national level program developed and implemented by DPIT Association. Since its start, 700+ youngsters have been engaged in building real applications under the guidance of tech mentors, and in 2019 two teams of high school students mentored by our colleagues took the podium of DPIT Academy Contest.

As a software services company, Fortech has maintained a business model that revolves around evolution, innovation, and a continues process of growth. Via a range of technologies such as JAVA, .NET, C++, Web, Mobile, and a series of fast-emerging technology segments like Cloud, ML, or AI, the company covers the end-to-end spectrum of a software product. The Fintech and Custom Healthcare Software Development verticals complete Fortech’s longstanding focus in Automotive, eCommerce, and IoT.